A prevalent issue with diastasis recti is that its appearance differs from person to person. At times, it can be almost imperceptible, show zero painful symptoms, or even worse, be considered a personal flaw – especially with women post-pregnancy.

Once you are postpartum, your body will always be postpartum. Because of the vast transition a woman’s body undergoes during pregnancy, the abdominals and skin will be stretched and move around because they accommodated another human being. One of the biggest hindrances to recovery is the idea that a healthy body means a slim, toned body. However, that is not true. 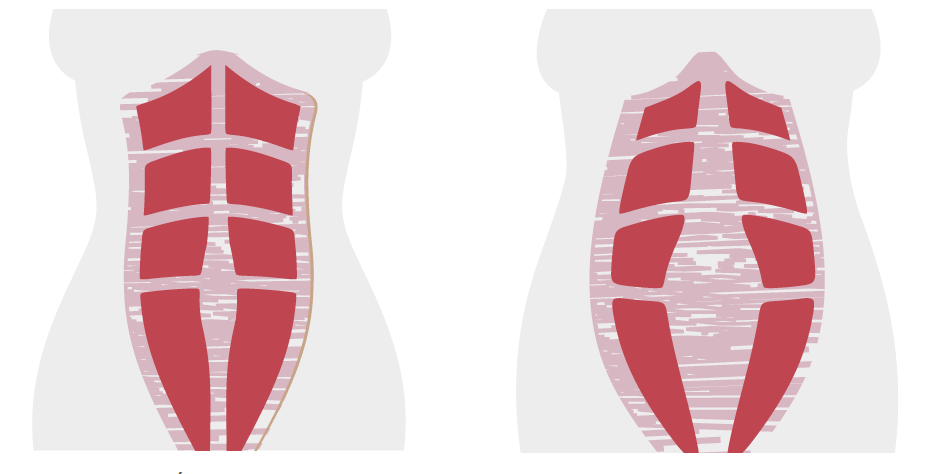 Diastasis recti is the stretching or separation of the abdominal muscles known as the rectus abdominis. These are the six-pack muscles that aid in core stability and strength. With a diastasis, the core’s strength is greatly affected and can lead to a weak body and many painful symptoms.

Rectus abdominis separation can lead to a host of issues and symptoms that vary from person to person. Some of the symptoms include:

Unless you have zero or very low body fat, it can be difficult to diagnose a diastasis recti on appearance alone. The connective tissue between the rectus abdominis muscles lie underneath the fat layer of the abdomen so it is hard to see. Many people have a diastasis and never know it!

How to Tell if You Have a DR

Although a bulge is not always an indication of a diastasis recti, it is one of the most common symptoms. Commonly known as a stomach “pooch,” this can happen when the core becomes unsupported by the weakened muscles creating a space for the abdominal organs to press up against the linea alba creating a “pooch” or bulge. This is normally more prevalent in core exercises like a crunch or sit-up.

This is the most common symptom of a diastasis recti. In minor cases, the separation can be around 1 or 2 finger-widths in size. However, in some severe cases is can range from 5 to 10 finger-widths! This effect is much more noticeable and is typically seen as a crevice or space in the midline of the abdomen. In this case, exercise and safe core strengthing techniques can restore the core to its natural state.

If you believe you have a diastasis recti, you can follow this link for more information regarding a self-test or have a physical therapist carefully examine you. If you find that there is a gap larger than 2.5cm, it is probably best to have a PT examine you.